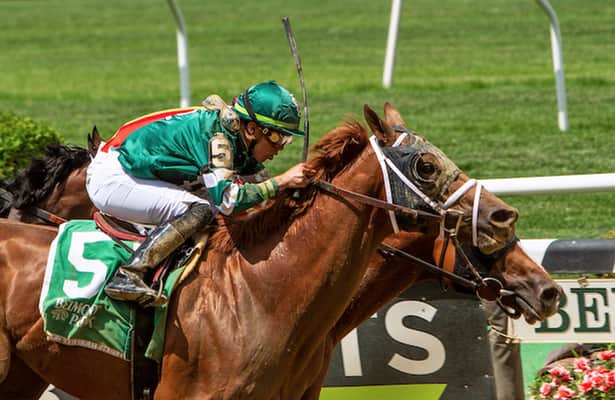 In this bi-weekly series, racing analyst Keeler Johnson shares promising horses from his Handicap Watch List, reviewing riders who have recently caught his eye and previewing horses set to return in the near future.

It’s safe to say that Dynamic One has come a long way since crossing the finish line 18th in the 2021 Kentucky Derby. The 4-year-old son of Union Rags won the 1 1/8-mile Blame at Churchill Downs last month, counting future second and third place Stephen Foster (G1) Americanrevolution and Proxy among its beaten rivals.

#5 Dynamic One (4/5) narrowly wins a #4 First Captain match with @iradortiz for @PletcherRacing.

The Suburban featured fast closing fractions, so the fact that Dynamic One managed to gain 2 1/2 lengths in the last half mile is impressive. According to Trakus, Dynamic One completed its last half mile in 47.21 seconds, which speaks to its quality. This Todd Pletcher intern could have even more upside and looks ready to jump into a 1st year business.

In August 2021, a 2-year-old named Rhetoric made his debut at a special debut weight in Del Mar. Despite close quarters between rivals down the stretch, he was only beaten half a length by the future San Vicente (G2) and San Felipe. (G2) Forbidden Kingdom winner.

Rhetoric then spent 10 and a half months on the sidelines, but his return to action in a special six-stadium first heavyweight on Saturday at Los Alamitos was impressive. The Bob Baffert-trained sophomore cut splits of 22.25 and 45.59 seconds before finishing fast (last two furlongs in 11.86 and 11.67 seconds) to dominate by six lengths in a fast 1 : 09.12.

The rhetoric impresses in the 5th. The winning rider is Juan Hernandez and the winning trainer is Bob Baffert. pic.twitter.com/LUrjQAVYRE

It was a solid comeback effort, and with just two starts under his belt, Rhetoric still has some upside to improve. I’m interested to see where Quality Road’s son goes from here.

Fresh off two impressive sprint wins, Conagher barely failed to extend his speed for 1 1/16 miles in the Iowa Derby at Prairie Meadows. After tracking and pressing fast fractions of 22.71, 46.14 and 1:10.19, Conagher opened up a four-length lead at pole eight, only to falter late and finish second by 1 1/2 lengths. Closing the distance (or getting an easier trip ahead) might be all Conagher needs to rebound.

Ran too well to lose in the Suburban, finishing second by a nose after engaging with Dynamic One in a close duel on the home stretch. As noted, the race was remarkably fast, with the final two quarter-mile sections clocked in at 23.74 and 23.77 seconds. This was the second straight stake in which First Captain has displayed powerful finishing speed, so he is quietly developing into a serious racehorse.

Failed to shoot on the turf return for the Belmont Derby (G1), running near the back of the pack throughout to finish ninth by 13 1/4 lengths. But Tiz the Bomb has been a very productive member of my watch list, winning four bets and paying as a winner for bets in the Breeders’ Cup Juvenile Turf, so I won’t let him down because of an unusual performance.

Failed the shot as a 4-1 second choice in the Belmont Oaks (G1), settling three lengths off the initial pace before faltering to finish ninth by 8 1/4 lengths against stable mate McKulick. I want to see Haughty bounce back with a better performance before backing her up again.

Regressed as an 11-10 favorite in an optional $16,000 starting claimer on Sunday at Gulfstream Park, pressing the early pace before fading to finish seventh by seven lengths. After two straight losses, I will remove Sayyaaf from my watch list.

Here is my complete and updated list of horses to watch.

How Social Media Could Be Harming Your Child’s Attention Span