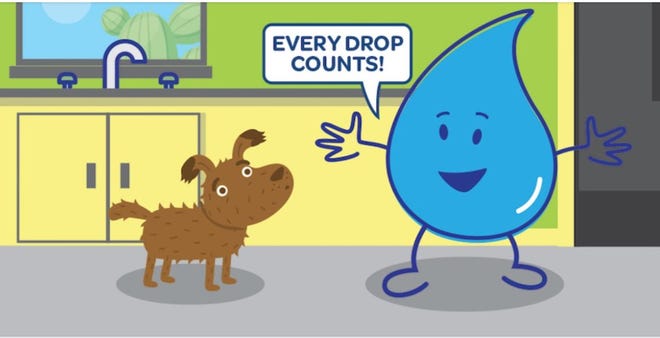 For years, Californians have been told to be careful when watering lawns, or to remove lawns completely, turn off the faucet while brushing their teeth, and take shorter showers.

This advice intensifies – and turns into mandates – when a drought worsens, as it did recently.

The cynicism is justified when average desert residents get such a nudge for conservation while developers plan four wave pools for surfers and, at a Disney-backed Rancho Mirage resort, a beach park and lagoon of 24 acres.

To be clear, we encourage conservation. Upgrading toilets and appliances makes sense, and lush green lawns are hard to justify in a desert.

How would you feel if you spent money on desert landscaping, trying to be a good citizen, and then found out that a recreational lagoon is dug across the road? Or if you installed drip irrigation when a professional ice hockey arena popped up down the street?

Of course, there’s symbolic value in requiring restaurants to serve a glass of water only on demand, one of the smaller steps the Coachella Valley Water District Board has taken. tuesday. He also banned daytime lawn irrigation and increased desert landscaping rebates by 50%.

But in a new reality of increasing drought due to climate change, we need to start thinking big – far bigger than a glass of ice cold water from a dinner party, or even the lawns of houses.

Elected officials need to change their approach to new developments. Should the Coachella Valley be a tropical paradise?

New developments are needed, especially given the state’s housing shortage and affordability crisis. And we all need water to live and eat. Pools are one thing, but why do people need to go surfing in the desert when the Pacific Ocean is only hours away?

Do people need backyard pools and a neighborhood lagoon? Again, let’s not forget: in a desert.

City councils should reject all requests for new surf parks, lagoons and golf courses, and should revoke approval for those that have not been built.

Golf courses largely use recycled water or private wells. But because people come into close contact with them, lagoons and wave parks must use drinking water, the very same that comes out of household taps.

Either every drop counts, as Splash tells us, or it doesn’t.

The massive wastage of water is unconscionable as residents of the East Valley still do not have access to clean drinking water because they cannot afford to pay to connect to municipal pipes – and because voter-imposed law prohibits providers from using their reserves to hook up new customers.

The more water that is used to maintain golf courses and fill water playgrounds, the less there is to replenish the valley aquifer. This will be key if our population continues to grow.

You could be forgiven for assuming that local water agencies decide who uses water and how much.

As Janet Wilson of The Desert Sun recently reported, their hands are often tied. Under state law, when a city council or county supervisors have approved a development, the water agency must provide it as long as projections show there will be enough to do so for 20 years.

So it’s up to the city councils and the county.

Most elected leaders, at least when they run for office, say they have a vision for the future of their jurisdiction.

But when you want to win the next election first, there’s always a short-term appeal.

Sometimes the long-term good thing isn’t immediately popular. Thinking big can mean spending more money on a project to make it less wasteful, or even rejecting a development altogether. This will get you accused of costing the city thousands or millions in tax revenue.

In addition to rethinking developments, cities should set goals to drastically reduce their own water use, which could mean reconsidering how parks and other facilities are built.

They should step up their efforts to work with tribes and Riverside County, perhaps through the Coachella Valley Association of Governments, on regional water bodies that have teeth.

Just as lagoons and surf parks suggest we don’t really value water, so does its cost.

When a family in a 2,000 square foot home can pay $17 a month for water, less than the cost of some Netflix packages, what incentive is there to save?

Even if they could, it wouldn’t be fair to put even more on the average person. Not until elected leaders show they’re serious about ensuring enough water for the desert’s future.