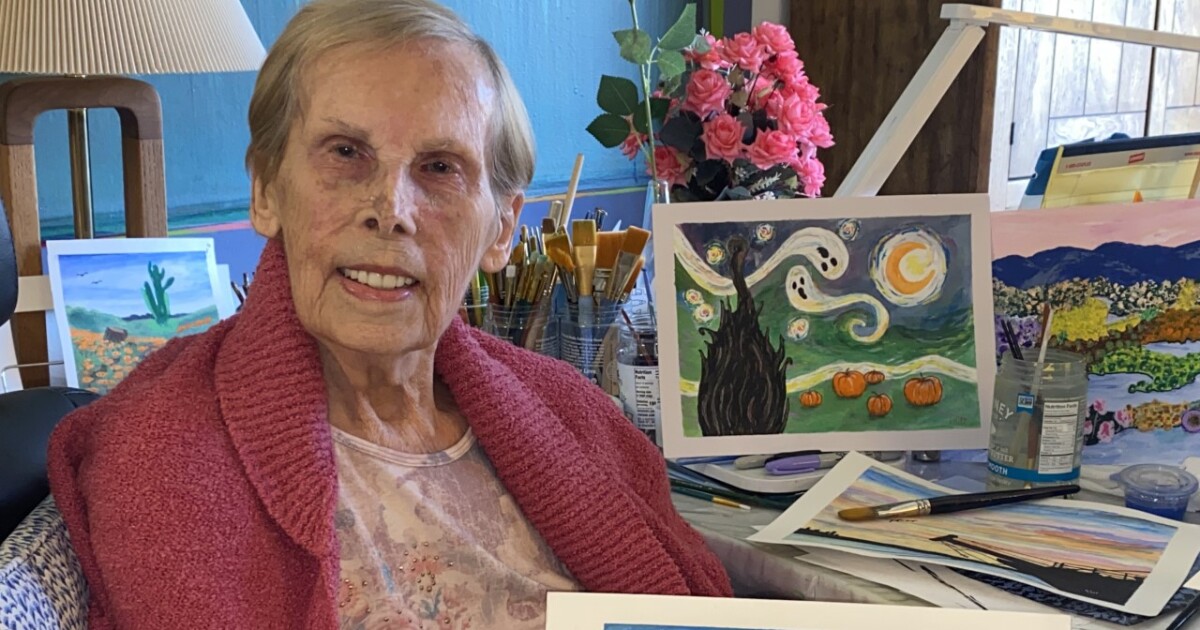 It’s a sad situation when a 95-year-old woman is forced to turn to painting and selling her artwork to avoid being fired from an assisted living facility.

Patricia Barnett, who turns 96 in October, has accumulated a lifetime of civic service.

She’s delivered Meals on Wheels, supported a shelter for abused women, donated her talents as a graphic artist to nonprofit causes. Over the years, the Cornell University graduate has campaigned for social rights, clean water and other environmental issues.

Specifically, her resume shows a history of fighting for housing for the needy, both as the former president of a New York agency set up solely to fund affordable housing and as head of the League of Women. Voters from her state, through which she also campaigned for fair rents and social housing.

Now the 49-year-old San Diego resident finds herself in desperate need of those services she has spent years trying to obtain for others.

Barnett’s civil service legacy was carried on in San Diego by his son, Scott Barnett, a familiar face in the local community.

He was a member of the Del Mar City Council at 21, led the San Diego County Taxpayers Association when it created its Golden Fleece and Watchdog awards to expose government boondoggles and try to control spending.

He founded a research service called Taxpayers Advocate and served four years on the San Diego Unified School District Board.

Scott’s mother lived with him in his old age. But four falls in 2016, failing health and increasing frailty have made assisted living and ongoing care a necessity. Now she lacks money.

Barnett spent his life being frugal and conservative with his finances, running a small graphic design business, saving for retirement, and paying long-term health insurance premiums. But she couldn’t predict the stock market crash of 2008, nor did she plan to live to be 90.

In desperation, Scott, along with his brother, David, and sister, Catherine Anderson, set up a GoFundMe campaign in late April to help their mother with food, rent and basic bills. To date, he has generated just over $3,000.

Barnett explained in his GoFundMe appeal, “The economic crash of 2008 wiped out half of my savings and forced me to sell my house. Now the rest of my savings and my long-term care insurance policy are gone. exhausted.

Her long-term health insurance coverage ended in April, leaving her mostly dependent on her monthly Social Security check of about $2,300 to pay for some medical bills and a monthly assisted living bill from around $5,700.

“After a life of self-sufficiency, I ask for your help to stay on assisted living,” she wrote.

Barnett’s kids originally added information about her community service career to her GoFundMe bio, but she forced them to delete it: ‘She didn’t want us to brag about her,’ says Scott .

Its touching appeal surely represents the parenting story of many of today’s baby boomers and Gen-Xers. These are seniors who have worked and saved throughout their lives, but have been overwhelmed by cost-of-living inflation and the rising cost of goods as a result of the pandemic.

Social Security benefits have not kept pace, making it difficult to make ends meet in expensive states like California.

The lack of affordable assisted living facilities puts economic pressure on their children and grandchildren who are already burdened with their own financial obligations. Or as Scott puts it, “It’s a ticking time bomb for us baby boomers.” I just turned 60.”

Barnett, who took classes at the Toledo Museum of Fine Arts as a teenager, had put away her brushes after suffering a stroke in 2004. But she dusted them off in 2019 and, despite inoperable cataracts in one eye , now turns out a colorful paint every 8 to 10 days.

She has completed approximately 150 artworks since entering assisted living 3½ years ago.

Scott posted an album of “Grandma Pat” paintings on Facebook. Many are whimsical and bold landscapes bursting with colorful flowers and patterns.

Her family connected her to a website that sells her art for wall decor, t-shirts, mugs, beach towels and other items. But the returns to the artist are low.

David Barnett worked with his Brookdale Senior Living facility, which waived some late fees and offered a small rent reduction or placement in a slightly cheaper room or a more budget-friendly sister property. But the cost of rent always exceeds his income.

“If residents cannot meet their residency contract payment requirements, we try to help them find a workable solution,” said Heather Hunter, communications manager for Brookdale in Tennessee. She said help can include referrals to other providers and information about other types of assistance.

“A Medi-Cal funded facility (for low-income residents) is currently the only option for her,” says Scott, whose mother was approved for Medi-Cal. “We started calling as soon as it was clear that she would run out of money (in April). The number of beds available is far below what is needed, so there are long waiting lists.

Sunita Upchurch, the county’s long-term care ombudsman, says there are cheaper options that may not be on a family’s radar. In addition to four- or six-bed home care facilities, seniors may be placed in senior residences and senior apartments where they are visited by home care nurses and linked to meal delivery home. They may also be enrolled and transported to adult daycare programs.

“By 2030, Californians age 60 and older will make up a quarter of the population,” says Blanca Castro, long-term care ombudsman at the California Department of Aging. “Seniors who rely solely on Social Security for their income receive an average of $1,200 per month, which must be used to pay for all basic needs.”

The department helped draft a state master plan for aging 2030 with the primary goal of reducing rental costs and investing in affordable housing. But that’s years away.

Scott calls his family’s GoFundMe campaign a Hail Mary attempt to hopefully fill the void. Eventually, he says, his mother will have a roof over her head but surely not with the luxury of space to paint in her room.

“It’s been stressful,” says Barnett, who doesn’t sleep well. “I wake up and worry about where I’m going to live.”

GOLDSTEIN: Despite the political rhetoric, the world is going back to fossil fuels