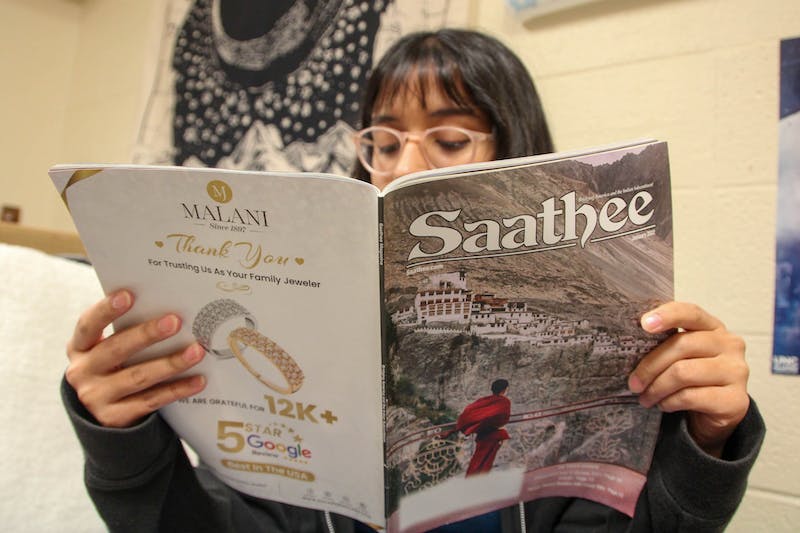 Four to 144 pages: South Asian magazine Saathee has been spotlighting community for over 20 years

Saathee, a free monthly publication focused on showcasing South Asian culture and community in the Triangle and Triad areas, Charlotte and South Carolina, was created to fill a need.

Divakar Shukla, the publisher of Saathee, said that in the mid-1990s there was no media in the region for the South Asian community. Shukla and her family launched Saathee to solve this problem.

The first magazine was printed at a local copy shop.

“We distributed it to people at different temples and restaurants,” Shukla said. “Our first issue in May 1998, we had 800 copies which we printed with about four pages. From there we grew to our biggest issue just before COVID of 144 pages.

Saathee covers topics such as immigration, local events, and personal experiences of the South Asian community. The word “saathee” comes from the Sanskrit word “sathi”, which means companion or helper.

Samir Shukla, Divakar’s brother and Saathee’s editor, said connecting the community has been the best experience working on the magazine.

“(Saathee is) not just a business,” he said. “It brings everyone together.”

“Our motto is to build a bridge between the Indian subcontinent and America,” he said.

Preethi Sriram, a writer for Saathee’s “Adult Indian Dance Student” blog, said she has been reading Saathee since she was a child.

“It’s a great magazine for the South Asian population, but also for anyone who wants to read it in general,” Sriram said. “Being able to buy a good magazine from a local Indian store or restaurant is a great way to stay in touch with more cultural happenings in the South Asian community.”

Sriram said one of the best experiences writing for Saathee was working with Divakar and Samir Shukla.

“Being able to contribute and write about my experiences has also been a really good experience overall,” Sriram said.

Another Saathee writer, Rishi Oza, said he had been writing on immigration for the magazine for about 10 years.

“People get information in all kinds of ways,” Oza said. “(Saathee is helping) a population that might not be able to access immigration information, which tends to be very complex and confusing.”

Oza said Saathee has a broad and positive reach in the community.

“As a member of the community, it’s really exciting to see a business grow and succeed,” Oza said.

Divakar Shukla said it was great to watch Saathee and the South Asian community grow over the past 25 years.

“When we came to Charlotte in 1979, there were hardly any South Asians there,” he said. “There were no temples, no restaurants and no grocery stores. Now there are so many big Indian grocery stores, temples and so on. We’ve been here since it was really small and becoming what it is now, our business has thrived in the same way.”

“You don’t have to say Saathee magazine, you can just say Saathee because we made it a goal everyone knows about,” Divakar Shukla said. “Everyone can get their information out of it.”

The magazine is available in linein shops and by direct mail. There is also weekly newsletter.

To get the day’s news and headlines delivered to your inbox every morning, sign up for our email newsletters.