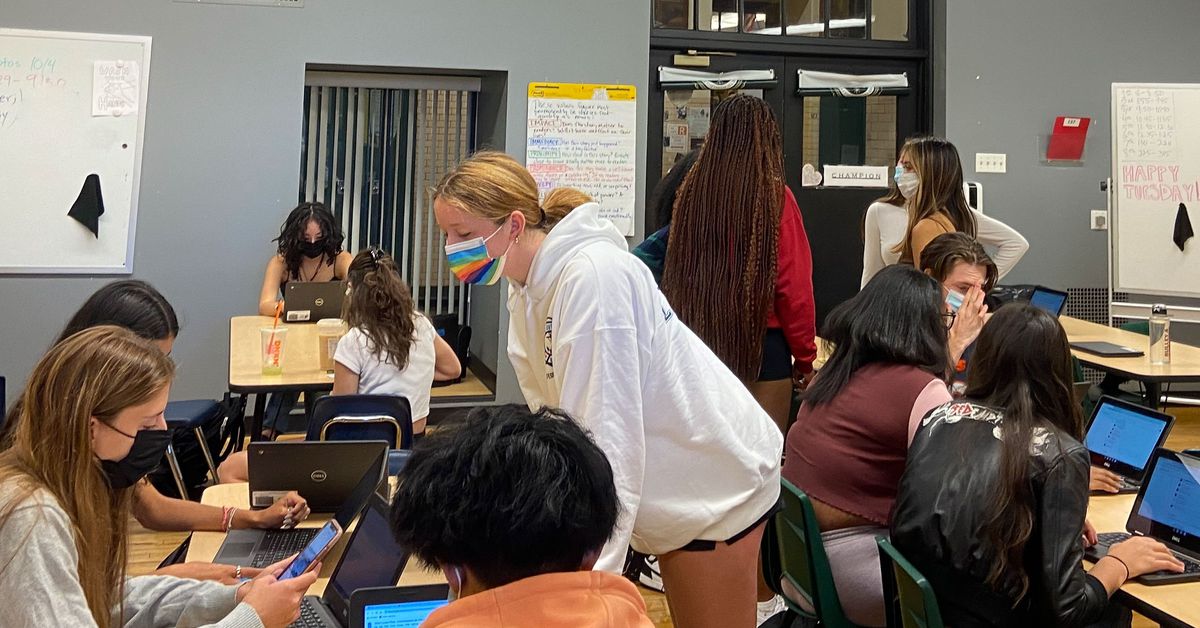 From reporting in class to taking action shots at sports games, my school’s journalism program is just plain fun, despite the hard work it takes.

As a member of a large and diverse student community at Lane Tech, there are a myriad of potential stories for our student news organization to cover. Scrolling aimlessly through the Lane Tech Champion website is one of my favorite pastimes, as the site – and its 12-year archive – showcases Lane’s rich history. The news site is at the heart of our journalism program. Unfortunately, the site is in danger.

What has blinded Lane Tech’s journalism curriculum – and other courses, such as computer science and art – is Chicago’s public schools interpretation of the Student Online Personal Protection Act, or SOPPA. State law, designed to give parents more control over their children’s data, also prevents educational technology companies from collecting protected information about students in some cases. Indeed, some vendors that schools – and student journalists – rely on have not even been approved or considered for approval.

Every morning, editors and reporters from Lane Tech’s student newspaper come to Room 137 to learn and lead. Gathered around a table, the student writers work on the stories and layout, amid the endless chatter and staccato of typing. But recently, the tension surrounding CPS’s interpretation of SOPPA has felt suffocating.

Student Newspapers Online, or SNO, is an essential program that many student newsrooms use because it is specifically designed for student journalists. The largest provider of news sites for colleges and K-12 students in the country, it makes the Lane Tech Champion and many other school news organizations easy to build their websites.

Unlike your typical website builder, it is designed specifically for school newspapers and offers journalism training. The latest news can be placed on a scrolling carousel, and the site can even be outfitted with a handy staff page loaded with photos, locations, and descriptions. Above all, the site is incredibly easy to navigate. The Daily Northwestern, Northwestern University’s daily student newspaper, is a shining example of a site built by SNO. Suburban Chicago schools such as Glenbrook South Oracle and New Trier News also use it. But CPS schools like Lane Tech, Jones and Northside can’t anymore.

This is because CPS blocks all other payment to SNO, making it difficult to post. We were advised not to post on the site in order to avoid difficulties with SOPPA and CPS, and that weighed heavily on us.

The news site is at the heart of our journalism program. Unfortunately, the site is in danger.

Formerly the Lane Tech Champion’s photo and graphics editor, I stepped into the sports editor role earlier this month. The position has been rewarding, allowing me to do a side report and watch the best of Lane’s sports teams. My photography and writing skills improved, which I can attribute to writing stories to keep up with demanding athletic programs. What I love most about posting a new sports story is scrolling through the gallery of photos that a fellow editor and I have put together, and shining through our action shots and our photos of smiling players after a victory.

But this school year, it has been difficult to publish something new and share my stories on our site built by SNO; it’s only in the monthly print edition and a temporary WordPress site that doesn’t look or feel the same. Fortunately, I have other places to post my work, like Lane’s volleyball team website, where one of the coaches graciously offered to post my stories.

The publication of print editions of The Champion also underwent drastic changes in the aftermath of SOPPA. Adobe InDesign, an industry-leading student multimedia software, is what we normally use for page layouts. But with SOPPA’s grip on our programs, including Adobe’s, we had to find another program.

When it became apparent that we had to stick with an alternative layout program called Scribus, my fellow editors and I had to learn the program and complete 12 pages in just two days. Adjusting to Scribus was no easy feat. We couldn’t download it to our Chromebooks, the school’s 1: 1 student device model provided us – so we had to download it to our personal laptops and bring it to school or, alternatively, to schools. iMac from the classroom.

Editors often look forward to extracurricular sessions – called Jamborees – where we get together to layout the paper before sending the pages to our print shop. But learning the new program made it a tiring process. We have lost sleep. While we may have taken this critical publication milestone, these changes and challenges should not be something that CPS student journalists must endure, especially at the expense of our mental and physical health.

With the basketball season just around the corner, the usual decision deadline for college applications looming, and winter athletic conditioning likely to fire some of us exhausted every night, the battle around. SOPPA only adds to our stress and workload.

As this situation unfolds, it has become clear to me how the bureaucratic decisions of the Chicago Public Schools Central Office can unintentionally harm students. Editing issues with SNO and InDesign made me work harder and adapt. But they also helped me understand how essential these programs are to our role in facilitating student expression. For now, however, we are prohibited from using these tools.

Megan Camacho is the sports writer for Track technology champion and a senior in high school. Now in her second year of writing for The Champion, she is passionate about journalism and Lane’s sports community.

A monthly roundup of stories for educators across the country.