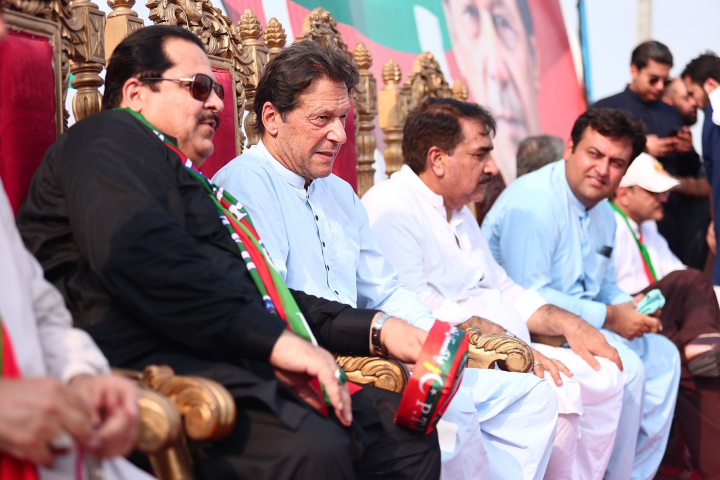 Imran steps up his rhetoric on political enemies, CEC

Former Prime Minister Imran Khan on Tuesday continued to invoke the mysterious figure he called ‘Mr X’ who he claims has been deployed to rig the upcoming partial polls of 20 Punjab Assembly seats, so that he was composing his tirade against the Election Commission of Pakistan (ECP) for being “in cahoots” with the PML-N.

Without naming a name, Imran sounded the alarm over the fact that a certain “Mr. X”, who sits in Lahore, is trying to seize electoral power after colluding with the ruling party in Province. The demand has been echoed in a number of his rallies in the province as he aims to take back the reins of the political heart of the country.

Addressing a rally in Darya Khan, the PTI leader made a clear call for his supporters to join hands in defeating the ‘thieves’, saying the elections were not just elections but a “jihad for true freedom”.

“When the number of looters inside a country increases, the country is destroyed,” he said and reiterated his claim that his government had been overthrown by the “thieves” imposed on the nation through the American conspiracy.

“These thieves have been sucking the blood of the country for 30 years. I was against these thieves when I entered politics.

He also repeated his claims that there were increasing attempts to intimidate and threaten him with calls on his phone. “I would rather sacrifice my life in my fight against these thieves but I will never accept them.”

During his address, the ousted prime minister also slammed the PPP and its co-chair, Asif Ali Zardari, alleging that the latter and his aides were laundering Sindh money abroad.

In a thinly veiled reference to PML-N’s Maryam Nawaz, he said a “lying queen” was leading the campaign of thieves and recalled that the Panama Papers revealed that Maryam Nawaz owned properties worth $4. billion rupees in posh London.

He said they hid the stolen money overseas to evade the accountability process. He urged the masses to defeat the thieves to change their own destiny on July 17.

Similarly, Imran also appealed to Chief Election Commissioner (CEC) Sikandar Raja and asked him to say how many times he had visited Hamza Shahbaz and Maryam Nawaz.

‘PPP to blame for Karachi’s woes’

Separately, a day earlier, the former prime minister lashed out at the PPP over urban flooding in Sindh and said the party had failed to address the rain-related issues even after ruled the province for 15 years.

Addressing a rally in Lodhran amid the July 17 by-elections, he said Karachi is the economic center of Pakistan and for 14 years it has been ruled by a dacoit who destroyed the city.

He cited the example of the former CM of Punjab and said that Usman Buzdar had built underground water reservoirs in Lahore to conserve rainwater, but the rulers of Sind had never thought of do anything for rainwater in Karachi. “Sindh cannot progress until Asif Zardari occupies the province,” he added.

Imran said Sindh money is looted and sent to Dubai. “The cases against former President Asif Ali Zardari and Sindh Chief Minister Murad Ali Shah were ready but an ‘unknown power’ prevented their prosecution,” Imran Khan said, adding that those in power did not consider not corruption as a bad thing.

Separately, in a tweet, Imran accused the Bhutto-Zardari family of corruption during the intense monsoon season that flooded the capital of Sindh and dealt a severe blow to the ill-prepared infrastructure.

“The rains again exposed 14 years [of] corrupt government,” the ousted prime minister wrote, adding that the city’s devastation was a “classic example of how corruption ruins governance.”

The PTI chief also accused the political dynasty of taking federal funds provided to Karachi, directing them to “fake accounts” and investing in Dubai real estate.

“This evil bond must be ended,” Imran remarked.

Meanwhile, with by-elections due to start on July 17 in 20 Punjab Assembly constituencies, the PTI also released a campaign announcement on Tuesday in which the former prime minister urged his supporters to step up to thwart ballot rigging.

In the video, Imran urged young people to vote in the upcoming by-elections in Punjab, saying the votes would serve as a “jihad” for “true freedom”.

“The thieves in power stole 11 billion rupees from the country and made amends,” the party chairman said.

He added that the government led by Prime Minister Shehbaz Sharif has wrecked the economy amid rising inflation in the country.