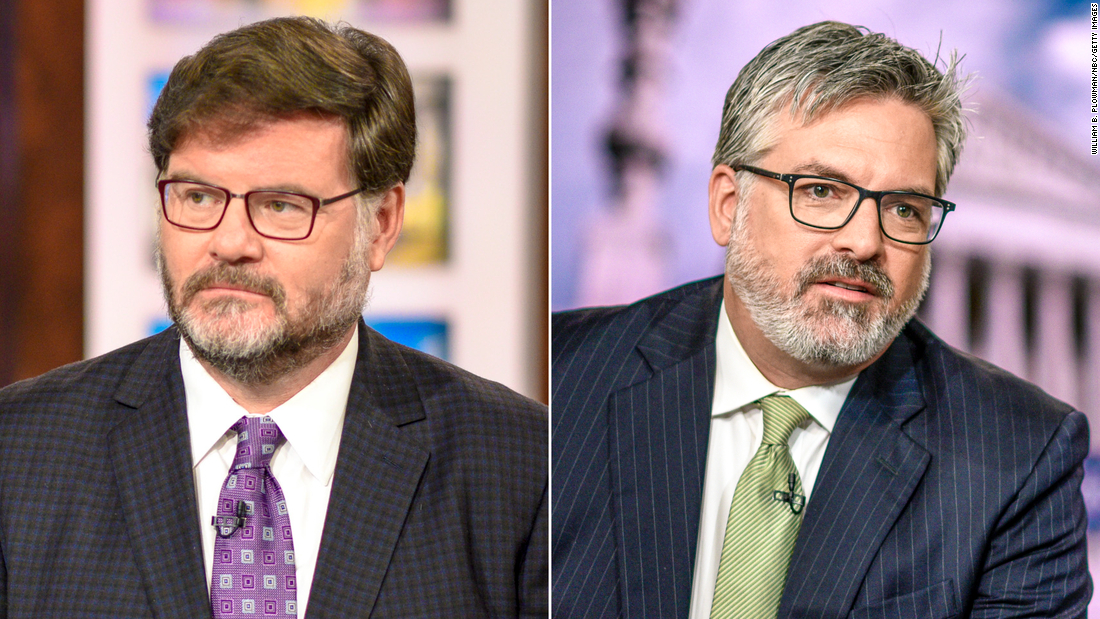 Every month or so, while chatting with sources at Fox News, I express my surprise that Jonah Goldberg and Stephen Hayes are still employed by the network. After all, both men are reality-based conservative thinkers who refuse to surrender to Donald Trump. Sadly, Fox viewers rarely hear from them. They are reserved by the producers of the network so rarely that their contracts could be compared to golden handcuffs.

Now they are dropping the handcuffs.

Hayes and Goldberg announced Sunday night that they had quit Fox. The pair wrote in a blog post for The Dispatch, their online home, that Tucker Carlson’s propaganda film “Patriot Purge” was the last straw.
“Fox News always does real reporting, and there are always responsible conservatives providing valuable opinions and analysis,” the men wrote. “But the voices of the leaders are drowned out by the irresponsible,” and Carlson is a case in point.
CNN and other media have describe how “Patriot Purge” is disturbing evidence of right-wing radicalization, complemented by January 6 denial and paranoid descriptions of a “new war on terror” targeting Republicans, with references to Guantanamo Bay and waterboarding footage .

â€œIt doesn’t happen. And we think it’s dangerous to pretend it does,â€ Goldberg and Hayes wrote. “If a person with such a platform shares such misinformation loud enough and long enough, there are Americans who will believe it – and act on it.”

Goldberg and Hayes just couldn’t be a part of it anymore.

New York Times media columnist Ben Smith, who broke the news of the resignation on Sunday, called Carlson for reaction, and the troll host understandably celebrated, saying “our viewers will be grateful” that Goldberg and Hayes are gone. But the conservative movement will suffer.
Representative Liz Cheney, one of the Republican Party’s main critics of Trump and the Big Lie, tweeted a thank you to the two men “for standing up for the truth and shouting dangerous lies”.

A rare sight inside Fox

Goldberg, in a telephone interview with Smith, provided a rare official glimpse into Fox’s political stance. According to Smith, “Goldberg said that” he and Hayes “stayed at Fox News as long as they did because of Fox’s conversations that after Mr. Trump’s defeat, the network would try to reclaim an issue. part of its independence and, as he put it, â€œright the ship.â€ But Fox’s decision to promote and release â€œPatriot Purgeâ€ in early November was â€œa sign that people have made peace with this leadership. things, and there’s no plan, at least, that someone has made me aware of a course correction, â€Goldberg said.

In Sunday night’s post on The Dispatch, both commentators said the “Patriot Purge” web series “creates an alternate January 6 story, contradicted not only by common sense, not just by testimony and official statements from many attendees, but by reporting from the news division of Fox News itself. “

Hayes and Goldberg praised the “news side” (which continues to shrink at Fox) but acknowledged that the opinion side had radicalized. “The release of ‘Patriot Purge’ was not an isolated incident,” they wrote, “it was simply the most egregious example of a long-standing trend.” So they went out. “We do not regret our decision”, they concluded, “although we unfortunately find it necessary”.

– Jonathan Martin, political reporter for the New York Times Frameworkd the resignation news like “Fox makes his choice, no.” In other words: Fox continues to side with the pro-Trump populist base at the expense of the more rational intellectual voices of the GOP. Fox chooses his path.
– Former assistant to Vice President Pence has become Trump administration critic Olivia Troye writinge, “Thank you Jonah Goldberg and Stephen Hayes for taking a stand for the truth against an ongoing dangerous business.”
– Conservative writer Bill Kristol sent the two men well dones “for standing up to Fox, shouting Stop, at a time when few other conservatives are inclined to do so, or for having a lot of patience with those who press him so …”
– Liberal writer Dan Froomkin reactionn: â€œWe should ALL leave Fox Noise. And reality-based journalists should work to wean America … ”
– “Steve and Jonah have been two of the bravest journalists during this whole mess”, David Brooks TweeterD. â€œThey have taken positions that have real costs. Consider supporting The Dispatch. “