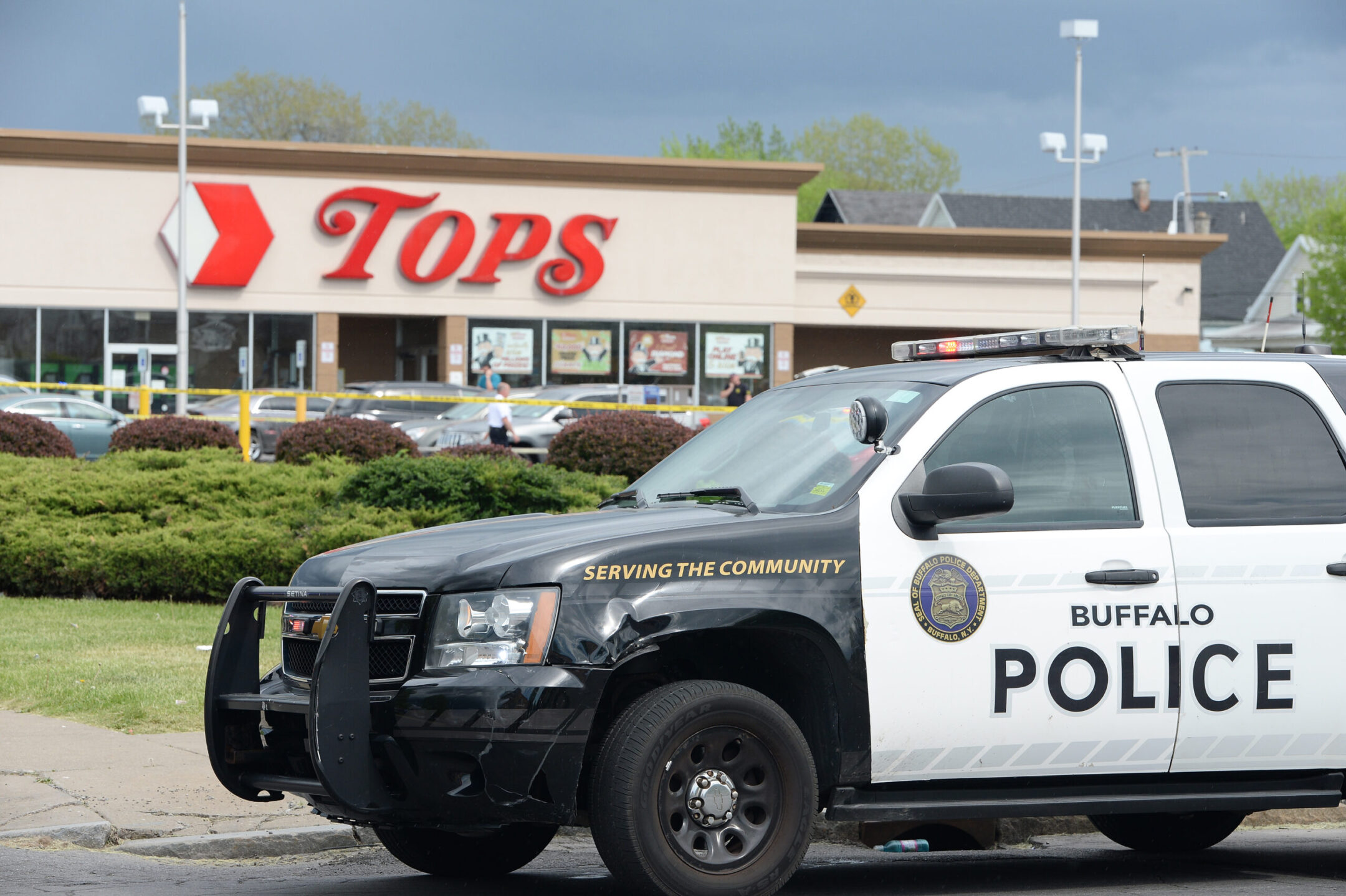 (JTA) — The man accused of killing 10 people Saturday at a supermarket in Buffalo, New York, is believed to have been motivated by a conspiracy theory that has sparked recent deadly attacks on Jews and others.

An online manifesto attributed to 18-year-old Payton Gendron says the attack was spurred by the theory that a wave of immigrants is crowding out white populations from Western countries. The manifesto also says that the Jews are the real problem but “they can be dealt with in time.”

Tops supermarket, located just a few miles from the Canadian border, was chosen because it is in an area with many black residents, the manifesto says. Eleven of the 13 people shot there were black, local law enforcement officials said.

Law enforcement is working to verify that the manifesto was written by Gendron, who was arrested at the scene and later charged with first-degree murder. The U.S. Department of Justice is investigating the shooting as “a hate crime and an act of racially motivated violent extremism,” Attorney General Merrick Garland said in a statement.

The baseless theory outlined in the manifesto is known as the “Great Replacement” and has united white supremacists across borders in their hatred of Jews and immigrants. The replacement theory has inspired multiple anti-Semitic and extremist attacks, including the 2018 Pittsburgh synagogue shooting in which 11 Jews were murdered; the 2019 attack on a New Zealand mosque that left 51 dead; and the 2019 massacre at a Wal-Mart in Texas that targeted Hispanic immigrants.

In 2017, white supremacists marching in Charlottesville, Virginia sadly chanted “Jews will not replace us.”

The manifesto cites the author of the New Zealand massacre as the main inspiration and says its author learned about the dangers of immigration through research online, including on 4chan, a website popular among right-wing trolls. .

The theory has gained popularity in right-wing media and politics. Tucker Carlson, Fox News Channel’s top-rated opinion host, has peddled replacement rhetoric for more than a year. In a passage from the manifesto purportedly penned by Gendron, the writer echoes Carlson’s phrasing in a notorious September 2018 segment, which began with “How precisely is diversity our strength?” The manifesto launches a similar salvo: “Why do we say that diversity is our greatest strength?

Tucker Carlson speaking on Fox News on April 9, 2021. Carlson’s comments about immigrants prompted the Anti-Defamation League to call for his firing. (Screenshot)

“Horrified by the #Buffalo shooting which is apparently motivated by #antisemitism and #racism,” ADL CEO Jonathan Greenblatt tweeted late Saturday. “The rhetoric that fuels hateful conspiracies must end. … These are the consequences of uncontrolled conspiracies.

The replacement theory has gained traction among some Republican officials, including Rep. Elise Stefanik of New York, whose local Albany newspaper decried her invocation of the theory in an op-ed last fall. An Associated Press poll released last week found that half of Republicans in the United States at least partially agree that there is an intentional effort to crowd out white Americans with immigrants.

Structured largely in a question-and-answer format and accompanied by collected memes and internet quotes, the manifesto explicitly states that the author is motivated by hatred of Jews.

The author says he deviates from many white supremacists in concluding that Jews are, for the most part, white. But, citing pages of quotations from the Talmud, he says Jews are polluted by learning that “they are God’s chosen people and have the right to hate and exploit the goyim” or non-Jews. , and engage in pedophilia. (The alleged fear of pedophilia is also at the heart of QAnon, another conspiracy theory with anti-Semitic roots that has spread across the American right.)

“Are you anti-Semitic? YES!!” the manifesto reads in one place. Later, the author answers the question: “Why attack immigrants when Jews are the problem? The answer reads, in part: “They can be treated on time.”

The manifesto cites George Soros, the Hungarian-born Jewish billionaire and philanthropist who is a boogeyman for right-wing conspiracy theories, as “primarily responsible for destroying our white culture.” It also points to Jews as driving the rise of critical race theory, an academic idea of ​​how racism is embedded in society that has become a recent rallying cry for right-wing activism. .

Users of gaming site Twitch were able to watch the 2019 synagogue shooting in Halle as it unfolded. (Getty Images, Twitch/JTA Collage)

The alleged shooter broadcast his attack on Twitch, a streaming platform for video game enthusiasts also used by the man who attacked a synagogue in Halle, Germany, in 2019. This attack was broadcast for 35 minutes; Twitch said it deleted footage of the Buffalo attack earlier.

The manifesto says Halle showed the author “there is enough time to capture everything that matters.”

The Jewish Federation of Greater Buffalo is among many local and national organizations providing support to residents of the city of approximately 250,000; it provides mental health services.