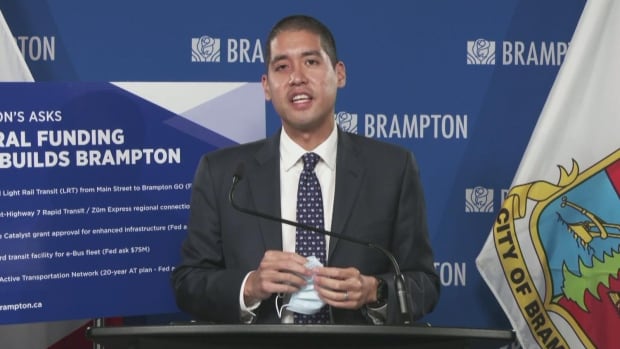 Peel Region’s top doctor says he is “increasingly concerned about divisive rhetoric” on vaccinations as authorities attempt to reach 330,000 eligible residents in the area still not fully immune to COVID-19.

Of those, Dr Lawrence Loh says 215,000 did not take a single dose of the vaccine, while 115,000 only took one. This means that a total of 23 percent of Peel residents aged 12 and older have not yet been fully immunized.

â€œWhile it might be hard to imagine, we are now at the most turbulent point in the pandemic where we have to thread the needle even more finely,â€ Loh told reporters at a press conference Thursday.

Peel has an average of 37 COVID-19 cases per 100,000, up from 41 last week. But while the situation in hospitals is “relatively stable,” Loh says the number of residents who have yet to be fully protected from the virus is weighing on him.

The majority of people hospitalized are unvaccinated or only partially vaccinated, said Mississauga Mayor Bonnie Crombie.

“It’s that number that keeps me awake at night, knowing our hospital could still see capacity issues and lives are on the line if Delta finds a way in and out of control,” he said. declared.

Demonstrations in front of “deplorable” hospitals: the mayor

Crombie had echoed Loh’s post, announcing a mobile vaccination clinic called Vax Van, which will be moving into the community over the next few months, from Malton on Thursday. In addition, she said, more clinics will be operating throughout the fall in places such as post-secondary schools, shopping malls, places of worship, fairs and parks to bring the vaccine to those who have not yet been vaccinated. Vaccination centers were also launched in 15 schools this week, she said.

Crombie added that the region is studying the data and examining community trends to better understand what those who are still hesitant might need.

WATCH | The mayor of Mississauga “totally appalled” by the protests at the hospital:

â€œIt’s one thing to spread misinformation about the vaccine,â€ Bonnie Crombie said at a press conference Thursday. “But harassing and intimidating healthcare workers and patients when they enter the hospital is deplorable.” 1:48

But of those who have stepped out to protest vaccines outside hospitals in recent weeks, Crombie said she was “totally appalled at their actions.”

“It’s one thing to spread misinformation about the vaccine, but harassing and intimidating healthcare workers and patients when they enter the hospital is just deplorable,” she said.

“Our frontline healthcare workers have shown us over the past 18 months what true courage and compassion looks like, taking enormous personal risks to care for the most vulnerable … some take their last breath.” , Crombie said.

Those who oppose vaccines or vaccine policies should bring their concerns to City Hall, Queen’s Park or even Parliament Hill, she said.

“But for goodness sake, leave our hospitals and our healthcare workers and these patients alone.”

The mayor added that she strongly supports law enforcement officials to take “whatever action they deem necessary” to keep hospitals and health workers safe.