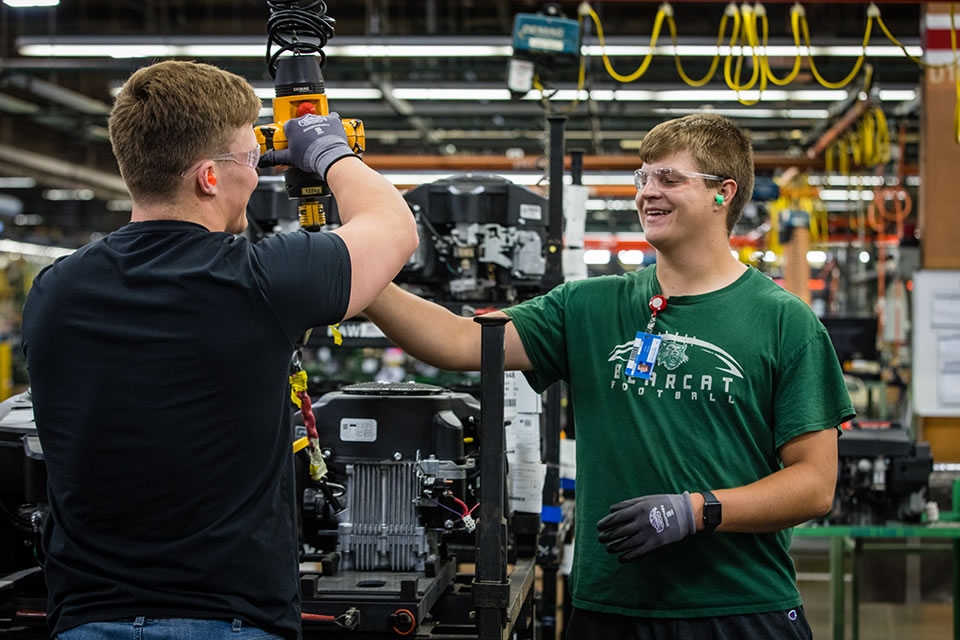 A Bearcat flag hangs above an assembly line at Kawasaki Motors Manufacturing Corporation in Maryville, where student-athletes worked this summer and helped strengthen the University’s partnership with the engine plant. (Photos by Lauren Adams/Northwest Missouri State University)

A Bearcat flag hangs above an assembly line this summer inside the Kawasaki Motors Manufacturing Corporation, but it’s more than a symbol of the engine manufacturing plant’s partnership with Northwest Missouri. State University.

In May, Bearcat football players Bryce Krone and Tyson Strohbeen applied to work at Kawasaki through its agency, Randstad. Attracted to the company for its competitive pay and flexible working hours, the duo started their shifts from 10 a.m. to 5 p.m. on weekdays and then – with Randstad’s referral bonus as an incentive – began recruiting new staff. other student-athletes to join them.

“We can come in 10 a.m. after weights and then work until 5 a.m., so it kind of appealed to me for its flexibility, and they’re willing to work with us,” said Krone, a young manager of the recreation and park. Major of Bonner Springs, Kansas, said. “I didn’t mind that it was in a factory. A lot of people said it was hard, but I was like, “It can’t be too hard.” So I just went with that.

Within weeks, nearly 40 of them were hired – enough to run an assembly line on their own, working on small engines up to 24 horsepower. With the Bearcat flag hanging overhead, the assembly line moves at a steady pace, carrying engines that need to be bolted to their frames and raced. Student-athletes inspect them for defects and check for gas or oil leaks.

They complete, on average, about 250 engines during their seven-hour shift.

“This is a dedicated and disciplined group of people who build products live for Kawasaki, while working around their sporting schedules,” said Tim Melvin, Kawasaki Human Resources Manager and Northeast Alumnus. West.

Nearly 40 Bearcat student-athletes worked on an assembly line at Kawasaki, completing small engines up to 24 horsepower.

Student-athletes and their supervisors agree that work helps them learn skills they can use throughout their lives and careers.

“They participate in real-world experiences, being held accountable to the same policies and procedures as other employees,” Melvin said. “With part-time employment making up a growing share of today’s workforce, this is a program that offers additional opportunities, not just for athletic scholars, but potentially for… ‘other North West students wanting to experience real-world activities in support of their educational targets and goals.’

Grant Cooney, a recent business management graduate from Topeka, Kansas, and member of the Bearcat football team, added, “It’s a different aspect of something I’ve never really seen before, and now i understand better how the manufacturing industry works.

As they prepare for their upcoming seasons, the student-athletes — who also include men’s basketball players Spencer Schomers and Christian Stanislaw — are building camaraderie as teammates that they hope will also translate to better performances on the playground.

“It’s good to work with your teammates because if someone on the line is wrong, you automatically look down to see who it is,” Krone said. “We joke with each other a bit about it, but without each of us the line wouldn’t move. We are working in this direction.

Additionally, Northwest and Kawasaki are partnering to offer the Kawasaki POWERing Bearcats program, which provides part-time employment opportunities for Northwest students as well as an invitation to interact with leaders and participate in engagement events. unique.

To participate in the program, students must work a minimum of 20 hours per week at the Kawasaki factory in Maryville. Work schedules are set in four-hour blocks to accommodate course scheduling, and Kawasaki offers 401,000 contributions on the first day of employment.

Kawasaki’s starting salary is $18.71, which means a college student working 20 hours a week could earn $374 a week and about $18,710 in gross pay over the course of a year – or about $74,840. $ in gross pay while at Northwest, if he works all four years. Kawasaki is also offering an extra $1.25 an hour for the second or third shift and potential for pay increases based on job performance.

Interested students are encouraged to apply directly for part-time employment at http://kawasakimaryville.com/.

Student-athletes working on an assembly line at Kawasaki bolted the engines to their frames and inspected them for defects. They completed, on average, about 250 engines during their seven-hour shift.

Kawasaki continues its support and partnership with Northwest

In addition to providing valuable work experiences for students, Kawasaki, which serves as an economic engine in the Northwest Missouri region and is Nodaway County’s largest employer, continues to support the University by funding two scholarships. and by sponsoring the guest writer series. The manufacturer created the Kawasaki Powering Dreams Scholarship in 2016 for students performing just below the highest level of academic achievement and financial need, and it created the Kawasaki Kids: Powering Your Potential Scholarship in 2019 to help people borne by Kawasaki employees.

For 25 years, Kawasaki has provided $5,000 annually to support Northwest’s Guest Writer Series, an initiative of the Department of Language, Literature, and Writing that brings creative fiction writers, poets, and nonfiction writers recognized nationally on campus for presentations and readings throughout the academic year. .

Kawasaki’s support of the University through the Northwest Foundation, along with support for Bearcat athletic programs, has totaled more than $350,000 since 2015. The company has also supported efforts such as a STEM workshop for educators in the region and scholarships for students studying abroad.

‘The gloves are off’: What the newspapers are saying about the TV Conservative leadership debate | UK News