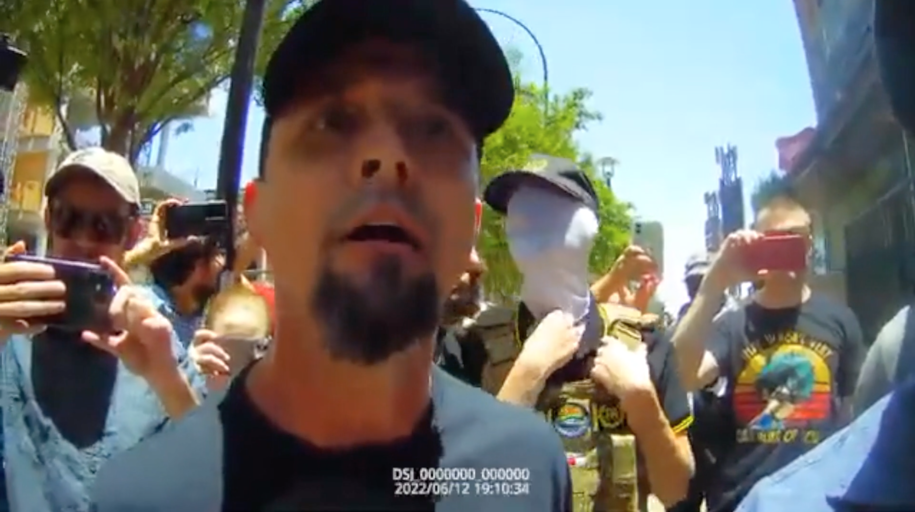 The Proud Boys have been implicated in attacks on Pride events elsewhere, particularly those related to drag queening:

The Wilmington incident happened when a group of Proud Boys showed up outside the library in support of protesters who were speaking out against a Pride storytime reading taking place inside. The men stormed into the building, flashing white nationalist “OK” signs and down the halls to the meeting room where the reading was being held.

Cape Fear Proud Boys boldly and gallantly descended on STORYTIME at the local public library in #WilmingtonNC to intimidate the crowd… which were only CHILDREN under SEVEN. Why? Because the script’s theme was “Pride” and “Celebrating All Families.” Who is POYB now? pic.twitter.com/QALnL6MguV

The sheriff’s deputies who showed up wouldn’t allow the protesters in, so they stood right outside the door and shouted “Groomers!” and other homophobic slogans as well as obscenities. Eventually, the remaining families inside the event were escorted out a side door, while the Proud Boys then allegedly began harassing ordinary library patrons. One of them got into a fight with a customer outside who threatened to hit him, but the police intervened and the fight was broken up.

A flyer advertising the event at the library described it as an “inclusive story hour featuring LGBTQIA+ stories to celebrate all families,” and was aimed at children under 7 accompanied by adults.

He appeared to several observershowever, that sheriff’s office deputies appeared to escort protesters into the library and allowed them to shout threats at attendees inside the room.

The sheriff’s office quickly released a statement denying this:

Sheriff McMahon said: ‘I was sworn not to hold opinions, but to uphold the law. This is exactly what my supervisor and my deputies did.

However, those present at the library claimed that this characterization of the events was wrong:

It’s an absolute lie and you know it. I encourage the public to wait for the real story on WHQR and PCD. Many of us witnessed with our own eyes the NHCSO escort of the Proud Boys (bc let’s call them who they are) and their klan in the building right in the room where kids as young as 1 were with their parents, as they shouted obscenities and threats. Only library staff and a handful of child advocates were able to intervene. This group, along with the officers who appear in the photos and on camera, were with them as they mocked parents and children both in the library during their personal visit with the NHCSO and outside . The children and parents were ushered in through a side door after the event was disrupted and they were traumatized by this gang with the support of law enforcement. I would hardly call it “uneventful”. Sheriff McMahon… it’s no wonder this community doesn’t trust you. Your actions are heinous, your words are blatant lies, and your ability to “protect and serve” is non-existent.

I was there. That’s definitely not how it happened. And they didn’t just harass those they thought were at story time. It was all the library patrons I saw.

Between school board meetings and this one, I don’t see where the casual conversations and fist bumps between the PB group and MPs is a positive thing. Why did this group need more protection than little children?

Linda Thompson, the county’s director of diversity and equity, said protesters didn’t enter the building until after the Storytime program ended. “The library director walked in with them, and deputies quickly made their way to the door of Storytime, to ensure the safety of patrons and library staff who were still in the room,” its statement read. “Members of the group of protesters were not allowed to enter the closed room where the event took place and where the families were still present, and there was no disturbance inside the building. Sheriff’s deputies and library staff also assisted parents and children who were still present (some had already left) on where to exit the library after the event. Parents and children were in no danger at any time.

Far-right groups with a wide range of ideological leanings, including neo-fascist white power groups like Patriot Front – which just had 31 members arrested in Idaho as they tried to riot during a a Pride event – ​​and Christian nationalists – including fundamentalist preachers demanding that gay people be lined up and shot in the head – have targeted Pride events across the country this year. The ADL said it monitored seven in-person extremist activities targeting the LGBTQ community over a single weekend, June 11-12.

Although they all seem to have a variety of pseudo-rationals for their irrational hatreds, the one thing they share in common in these attacks is vicious eliminationist demonization using rhetoric – like labeling every LGBTQ person and their advocates “groomers”. – identifying them as real or potential predatory pedophiles. For the Proud Boys, who have developed an undemocratic strategy of displaying their brutality at mostly grassroots events hosted by others, it’s an ideal choice.

As John Kneffel of Media Matters observes, much of this hate narrative is being generated in ostensibly mainstream conservative neighborhoods by social media influencers such as @LibsOfTikTok. One of the main generators of the hate campaign in Texas and elsewhere is a woman named Kelly Neidert, the founder of Protect Texas Kids, who has organized a number of protests outside of Pride events, including one in Dallas that drew a mob of White – Nationalist Groypers to harass parents and children.

Neidert – who has described herself online as a “Christian fascist” – got a permanent suspension from Twitter last weekend after posting: “Let’s start bringing people together at Pride events.”

It was Neidert who organized the failed protest in Arlington, apparently targeted because she and others mistakenly believed the event involved children’s storytimes. Despite the blunder, the Proud Boys in Buc-ee masks, as reported by Kathryn Joyce at the Show, still entered the event to harass attendees.

She notes that “several men wearing the same Buc-ee masks, including one also wearing a military-style tactical vest, entered the back rooms where people had gathered, staring at them until that other diners were sufficiently alarmed to call the police. The men left without incident, displaying the “OK” hand gesture that has become associated with white supremacists. But at the end of the reception, the organizers warned the participants to leave in pairs.

The same men, Joyce reports, showed up at a city council meeting in Frisco, Texas, where Neidert was testifying against the local proclamation of Pride Week. Seated before them was a local Justice of the Peace candidate named Steph Gardella.

She told Joyce she heard them call the “disgusting” LGBTQ community “pedophiles” while implying that they would like to take the parents who brought their children to the outside event to beat them up.

“I don’t mind the bluster. I don’t mind people talking incredibly loudly and saying hateful things. But there was something about the energy of those guys who had the hair on their necks standing up,” said Gardella. “What I saw in Frisco scared me to open my door at home.”

They ‘started shouting homophobic and transphobic slurs’ and were described as ‘extremely aggressive’, MPs said, adding that they exhibited ‘threatening violent behavior causing people to fear for their safety’.

Drag queen Panda Dulce, who hosted, told Buzzfeed News that attendees sang a welcome song together — “as wholesome as you can imagine” — when the Proud Boys showed up.

She warned that the LGBTQ community would not back down: “They want us gone. They want us not to exist so they don’t have to confront their own discomfort that there are people different from them in the world,” Dulce said. “But guess what? There are people different from you in the world. And we will stay here. And we will continue to do what we do. And we’re going to be visible about it.