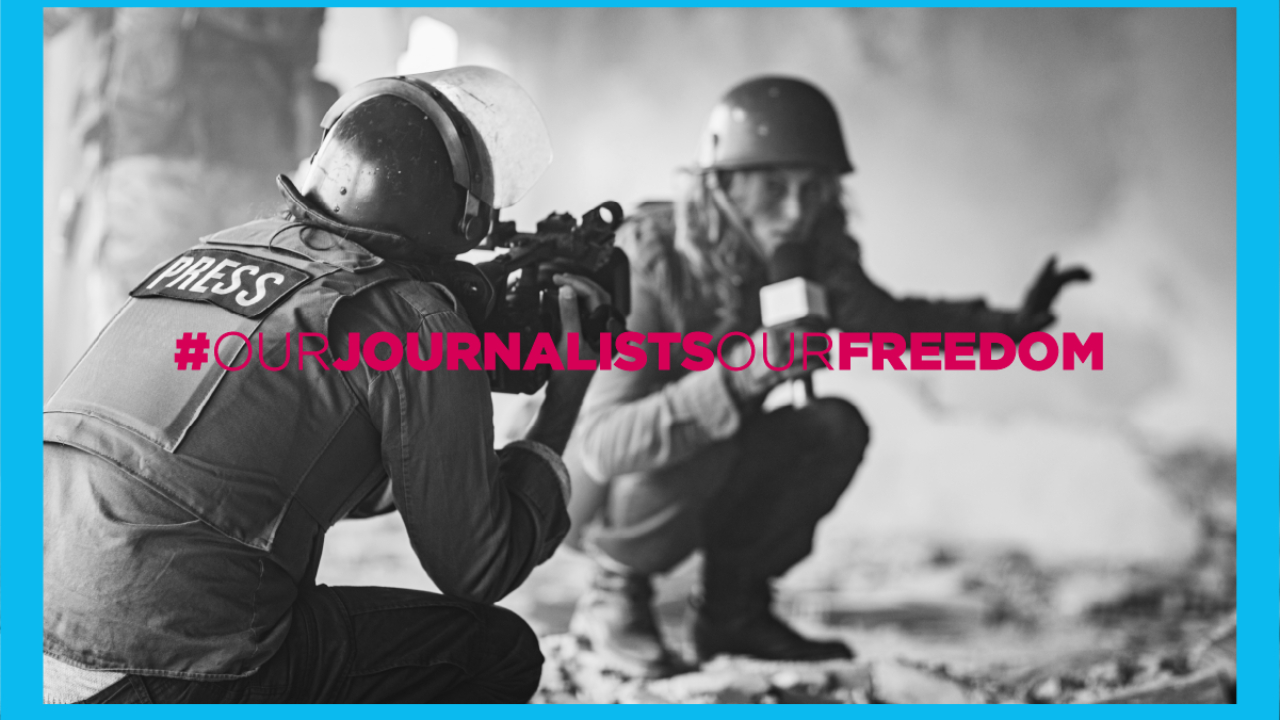 A new EBU campaign launched today – #OurJournalistsOurFreedom – aims to raise awareness of the magnitude of the problem and to call for change.

In his ‘press freedom barometer‘, Reporters Without Borders calculates that 24 journalists were killed in 2022 alone – six of them in Ukraine – and two press assistants. We asked our member public broadcasters about their experiences. These are just a few examples that launched the campaign:

Eimear Lowe, Foreign Affairs Editor at RTE and Deputy Chairman of the EBU News Committee, said: “We have seen many more cases of verbal and physical intimidation. We have had to tighten security around our campus, erect fencing to keep the public out, and notify the police if protests are planned. Now, we wouldn’t allow a single staff member to cover a potentially difficult story. We always have at least one cameraman and one reporter.

Petra Zilken-Leitgeb, international program coordinator for ZDF agrees: “We have seen an increase in attacks, many of them during protests against Corona restrictions. In addition to verbal assaults, including foul language, we are also witnessing the harassment of journalists in the digital sphere. We report every case, but legal action is often not effective because the sources of the harassment cannot be identified. »

NOS in the Netherlands was forced to remove logos and branding from its outdoor broadcast trucks, due to targeted assaults including highway brake tests and vandalism. Marcel Gelauff, editor of NOS News, said: “Our journalists frequently face insults and threats, especially on social media, and accusations of spreading false information. It became a big problem to cover protests related to our government’s Corona policy, so much so that we had to keep our distance.

A public broadcaster, who wishes to remain anonymous in the event of retaliation, said: “During the pro-Navalny protests a year ago, the police started beating people with batons. Our correspondent was hit and injured.

These threats to the safety of journalists have given rise to initiatives aimed at creating safe working conditions for journalists. Asun Gomez Bueno, director of international relations at RTVE and vice-president of the EBU news committee, is responsible for setting up an EBU working group, which aims to improve security on the ground , online and in newsrooms. It recommends a range of support, including a series of ‘how to’ videos in the event of harassment, expert guides on how to report incidents, and help and support through access to professionals, including lawyers, consultants and IT experts.

The work complements the specialized training offered by the EBU Academyincluding the Hostile Environment Safety Training (HEST), which particularly focus on equipping media professionals physically and mentally to work in dangerous and unpredictable situations.

ZDF has increased collaboration with security teams on designated risk assessments, training, the use of protective equipment and, in some cases, the hiring of security services. The broadcaster also quotes: “Networking and liaising with other public broadcasters before and during such events is both encouraging and helpful.”

NOS launched a Press Security initiative that involves the Dutch Association of Journalists and the Society of Editors and works closely with the police and justice department.

ORF, which had encountered similar problems to NOS with visible branding and logos, had to take corresponding measures: “A workshop was organized to learn more about de-escalation strategies and the teams of journalists and cameramen reporting on COVID protests would only do so voluntarily; no branding has been used on microphones, cameras or jackets; and journalists could ask security teams to accompany them.

Commenting on the moment its campus was overrun by protesters, RTE said: ‘It was unpleasant – and unprecedented – for the staff. We had to install visible security measures. It’s a shame as we consider ourselves a public resource, but we need to take steps to protect our staff.

Liz Corbin is Deputy Media Director and Chief Information Officer at the EBU. “Reporting accurate, factual and reliable information depends on the ability of our journalists to report stories safely and without hindrance. Unfortunately, we observe trends that show that journalists are not seen as neutral observers, but as enemies. Not only is this extremely taxing for our staff, but it has serious implications for how we report a story. Or in some cases, if we report a story. It has to stop. The freedom of the media – and the provision of reliable and accurate information to our audience – depends on it.

The EBU has dedicated the week leading up to World Press Freedom Day on 3 May to highlighting these heightened threats to the safety of journalists and, by extension, media freedom, under the hashtag #OurJournalistsOurFreedom.