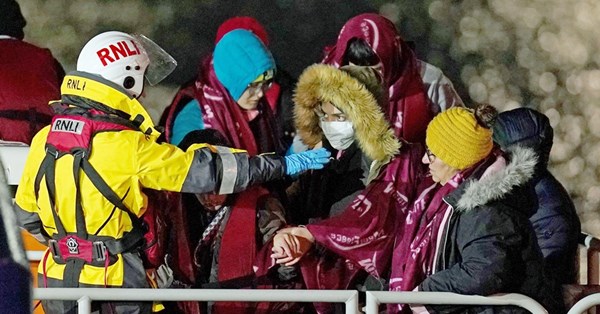 The Bishop of Dover, The Right Reverend Rose Hudson-Wilkin, expressed his anger and outrage at Wednesday’s disaster in which 27 migrants – 17 men, seven women and three children – drowned when their inflatable boat capsized in the English Channel.

Migration must stop being used as a political football, she warned. â€œI feel a deep inner rage that the world continues to allow this to happen, accompanied by political rhetoric as to whose fault it is. It’s all our fault, we all have to take responsibility, â€she told BBC Radio Kent.

The new Immigration and Asylum Bill, backed by the Commons when first reading in July, will make arriving in the UK without permission a criminal offense and empowering asylum seekers to return. asylum to ‘safe third countries’ if they have gone through a prior to arriving in the UK. Border force officers will have the power to turn back boats attempting to cross the Channel “and to use reasonable force if necessary”.

Speaking in a debate in the House of Lords on Thursday, the Bishop of Coventry, Dr Christopher Cocksworth, said a policy of deterrence which also failed to provide adequate and safe alternatives to migrants was insufficient. “I fear that in seeking to preserve life, this may not only fail, but also undermine our underlying commitments for the dignity of life and the promotion of justice,” he said. .

“Many of these migrants have so little to lose, will have suffered so much in their home countries and are so close to the finish line, that Britain will always be worth targeting, no matter how hard we make it difficult for them. They won’t be deterred by yesterday’s events – in fact, we know from today’s crossings that they aren’t – or by our efforts to make things even more difficult for them.

â€œAs we know, family ties, linguistic considerations and their reliance on deep traditions of British tolerance, sanctuary and human rights will always make Britain a worthy prospect for them. They are right. to hope that their asylum claims will be successful; of the 400 people in Coventry hotels who are awaiting the outcome of their application, we expect at least 60 percent to be successful.

“So we would need to duck very low and get very hostile to make a trip to Britain really unattractive for them.”

Dr Cocksworth called on the Home Office to ‘be ambitious’ with the UK’s new resettlement scheme and explore a regulated model, such as a humanitarian visa system, to allow people to enter directly from France. He described Wednesday’s events as resulting from a political crisis rather than numbers.

“They stem from a failure to recognize that we cannot deal with this problem in isolation by simply securing our borders,” he told the Lords. â€œActing with justice for those who suffer the world’s ills means working together to tackle the underlying causes of migration, which are staring us all in the face.

The former Bishop of Oxford, Lord Harries of Pentregarth, also called for the problem to be handled “humanely and fairly, with common sense and a sense of perspective”, and for it to be a responsibility equally shared between different parts of the country.

“There will always be some truly desperate people fleeing from oppressive regimes, areas of violent conflict and acute famine – a situation that will worsen in the years to come due to the effects of climate change,” he said. .

â€œPeople are desperate enough to take dangerous long-distance trips because the alternative, quite simply, is worse. We can be very grateful to the UK for acting with humanity where it matters most, saving people at risk of drowning in the English Channel. This is and must remain the first priority.

â€œNext, refugees, whether genuine asylum seekers or economic migrants, must be provided with human accommodation while their case is being processed.

Bishop Rose then commented on Premier Radio: â€œWe must all take our responsibilities. We continue to contribute to the rhetoric around migrants, asylum seekers, refugees, economic migrants, whatever terms we want to use. We shake up the rhetoric, which then goes to politics and then they accentuate it, because they think that’s what the people want. They have to stop this.

â€œIt’s too late to blame people. The traffickers are miserable people, and they abuse the most vulnerable, and that is despicable. But it’s not about blaming this group or this country, etc. It’s something epic. It deserves the international community to sit down and not leave the table until it finds a solution. “

News of the tragedy led to a “song of lamentation” in the head of the Bishop of Leeds, the Right Reverend Nick Baines. In his Thought for the Day show on today’s BBC Radio 4 Thursday show, he said: â€œNow is not just the time for politics; rather, it’s a time to dig deeper emotionally and be touched by the tragedy.

“Each [who died] had a name, a story and people who loved them. God knows their name, even though I don’t know him.