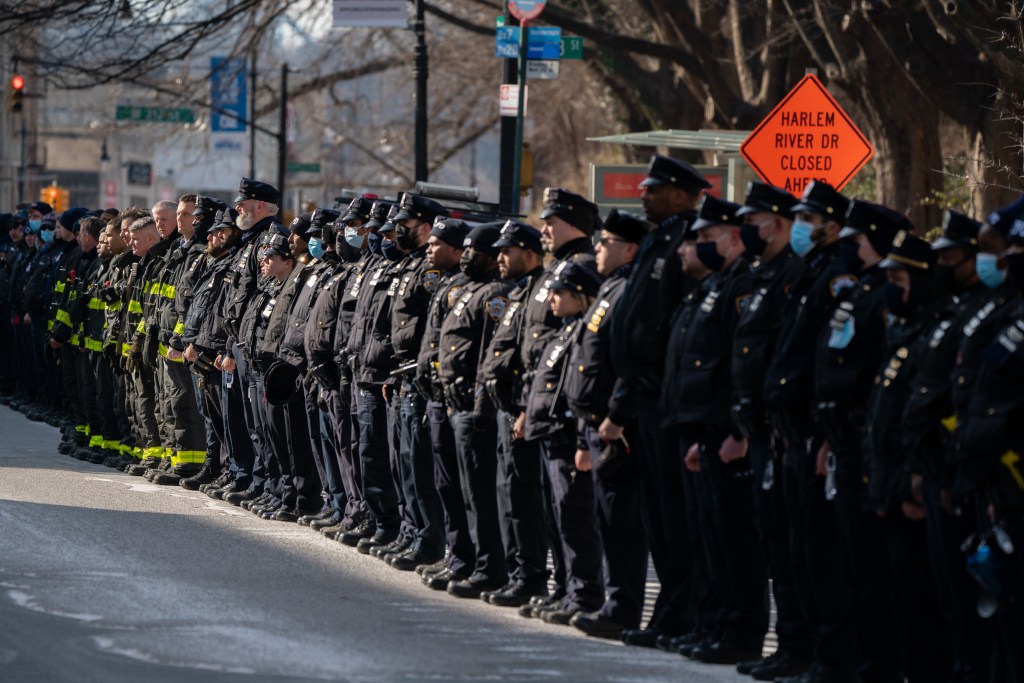 Time is up for NYPD bashers

“The NYPD is still the biggest gang in New York,” spat rookie City Councilwoman Kristin Richardson Jordan when she took office on Jan. 2.

Nineteen days later came the murder of NYPD officer Jason Rivera in Jordan’s Harlem district, and she was humming a slightly different tune: “A loss of one is a loss of all,” a she declared. “I stand with the families of the dead.”

An act of contrition? Or a statement of convenience?

Most likely the latter. For one thing, standing “with the families of the dead” is not the same as standing with cops ready to lay down their lives for your constituents. On the other hand, it’s really, really hard not to imagine a thought bubble above this bitter woman’s head: “One cop down, 35,999 left.”

Yet, as this newspaper detailed over the weekend, Jordan wasn’t the only usual suspect to cut the rhetorical veils after Rivera’s murder. Some were backtracking so blatantly that perhaps something other than vice paying homage to virtue is happening.

Take public attorney Jumaane Williams: “Hiring cops is sending the wrong message,” he said right after the 2020 Macy’s Herald Square looting. But after Friday came this: “[Rivera died] while trying to protect the safety of another New Yorker like countless officers do every day.

Or Attorney General Letitia James. Before: “The police are steeped in racism.” After: “All of New York is in mourning tonight. We pray for the safety of our police. Even Manhattan District Attorney Alvin Bragg, who opposes effective law enforcement on matters of principle and policy, tweeted that “violence against police cannot be tolerated. We are actively working to hold the shooter accountable.

But the fact remains that if the killer hadn’t shot anyone, but had obediently surrendered his gun – it was a Glock with a grotesque extended magazine of 40 rounds – he probably would have been back on the streets within hours, according to the non-“carceral” of Bragg. -prosecution policies.

Still, the DA was clearly shaken by Friday’s bloodshed, just as it was shaken by the harsh general backlash to its soft-on-crime policy — and especially the opposition from Manhattan business leaders. .

The Partnership for New York City’s Kathy Wylde is a city treasure, but she’s not one to stir pots in public. His surprisingly unusual first critique of Bragg sent a stark message: the community that had poured countless billions into the city’s post-Giuliani-Bloomberg resurrection doesn’t want to be part of the brave new world of AD.

This attitude is something New York’s anti-police political class will ignore at their peril – as the city seems to be waking up. When a rookie cop, an accomplished career woman, and a 19-year-old fast food cashier are murdered by violent career criminals on successive weekends, people pay attention.

And there’s more to it – social media is also a huge focus of attention.

When New York last fell into the abyss, people were pretty much alone – isolated, aware of their own victimizations but lacking direct knowledge of the experiences of others.

And so it took a long time – too long – to build a successful, reform-oriented political coalition.

But this time, maybe not so long? This time – as each successive outrage and so many personal encounters with crime – trickle down to social media, maybe the critical mass will arrive sooner? After all, there’s no need to change Alvin Bragg’s heart, just his politics.

Let’s hope for a smartphone revolution.

Political rhetoric heats up at Kenner, over $80,000 in disaster payout to top official | Local policy