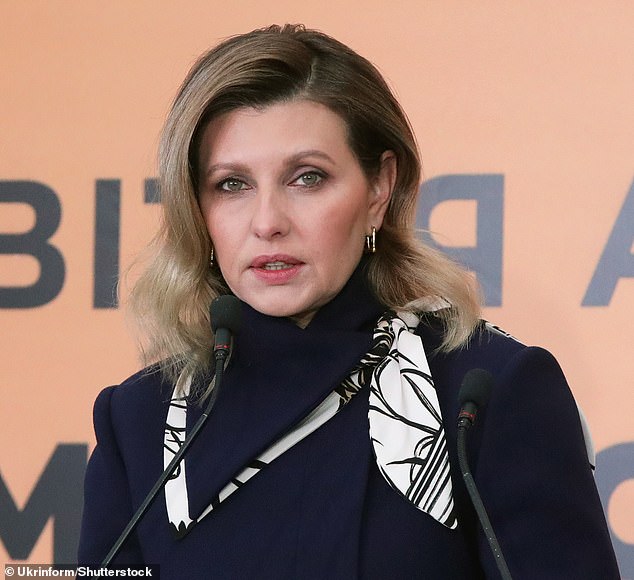 Ukrainian President Zelensky’s wife has pleaded with the media to ‘tell the terrible truth’ that Putin’s troops are killing children ‘knowingly and cynically’.

Olena Zelenska took to Instagram to say Russians have been killing Ukrainian children since Putin’s forces invaded on February 24.

She asked NATO to set up a no-fly zone over Ukraine to “save our children, because tomorrow it will save yours”.

An 18-month-old boy named Kirill (pictured being carried by his father) was fatally injured in the southern city of Mariupol after Russian forces shelled Ukraine’s second city just minutes after an agreed ceasefire on Saturday.

She wrote: “When people in Russia say that their troops do no harm to the civilian population, show them these pictures!”

‘I have to tell you about it. At least 38 children have already died in Ukraine.

“And this figure could increase at this very moment because of the bombing of our peaceful cities!

“When people in Russia say their troops are not harming the civilian population, show them these pictures!”

Grieving parents kissed the lifeless body of their son lying on a stretcher in the besieged city after the area was shelled by Russian forces.

Footage has laid bare the barbarism and horror of the Russian invasion of Ukraine as the parents of 18-month-old Kirill were seen grieving for their son after the toddler was killed by gunmen Russian bombings.

An 18-month-old boy named Kirill was fatally injured in the southern city of Mariupol after Russian forces shelled Ukraine’s second-largest city minutes after a ceasefire was agreed on Saturday.

Kirill’s devastated mother Marina Yatsko and her boyfriend Fedor were then seen grieving as they embraced the lifeless body of their son lying on a stretcher in the besieged city.

And yesterday, in some of the most harrowing scenes of the war so far, the bodies of those killed in the mortar attack were seen lying motionless on a road.

Beside them were suitcases packed before what they hoped would be a trip to safety. There was even a pet carrier among the luggage.

A person who tried to flee with his family, lies on the ground after the shelling of the Russian army at the Irpin evacuation point

Three members of the same family were among those killed when Vladimir Putin’s forces attacked Irpin, a town 20 km from Kiev.

On day 11 of the conflict, men, women and children have been needlessly targeted and their neighborhoods reduced to rubble.

Across Ukraine, Red Cross-brokered ceasefires have been broken and humanitarian corridors have been closed. The British government said Russia was targeting “populated areas” to break the resistance of the Ukrainian people.

The use of this heinous tactic was indisputable last night despite Putin’s denials and disinformation emanating from Moscow.

Ms Zelenska added: ‘Show them the faces of those children who didn’t even have the chance to grow up. How many more children have to die to convince Russian troops to stop shooting and allow humanitarian corridors?

On day 11 of the conflict, men, women and children have been needlessly targeted and their neighborhoods reduced to rubble. Pictured: The Zelensky family

“We need corridors in the hottest cities in Ukraine right now!” Hundreds of children die there in basements without food or medical care.

“Russian soldiers shoot at families trying to leave the buildings. They also kill volunteers who try to help.

“I call on all impartial media in the world!

“Tell that to Russian mothers, let them know exactly what their sons are doing here in Ukraine.

“Let them know that they are personally responsible for the death of every Ukrainian child because they gave their tacit consent to these crimes.

“To NATO countries: close the skies over Ukraine! Save our children, because tomorrow he will save yours!

Just days ago, a captured Russian soldier pleaded with his family not to believe Moscow’s “propaganda” that Putin’s troops were killing children in Ukraine.

A soldier, who was captured by Ukrainian forces, has urged people not to trust what they hear on Russian TV, saying the Kremlin is “brainwashing” people.

The soldier, who was captured by Ukrainian forces, urged people not to trust what they hear on Russian TV as he claimed the Kremlin was “brainwashing”.

In a video shared on Facebook by Ukraine’s Security Service, the soldier claims that Russian troops are killing civilians and babies in Ukraine.

He said, ‘What’s going on here [in the Ukraine] it’s all Russia’s fault. Neither Ukraine nor anyone else. They [Russian troops] killing civilians. Babies are murdered.

Readers of Mail Newspapers and MailOnline have always shown immense generosity in times of crisis.

Appealing to that human spirit, we are now appealing to raise funds for refugees from Ukraine.

For surely no one can fail to be moved by the heartbreaking images and stories of families – mostly women, children, the infirm and the elderly – fleeing the invading Russian armed forces.

As this tally of misery mounts over the coming days and months, these innocent victims of a tyrant will need housing, schools and medical support.

All donations to Mail Ukraine Appeal will be distributed to charities and humanitarian organizations providing these essential services.

In the name of charity and compassion, we urge all our readers to give quickly and generously.

TO MAKE AN ONLINE DONATION

Add The gift aid to a donation – even already made – complete an online form available here: mymail.co.uk/ukraine

By bank transfer, please use this information:

TO MAKE A DONATION BY CHECK

TO DONATE FROM USA

US readers can donate to the appeal via wire transfer to Associated Newspapers or by sending checks to dailymail.com headquarters at 51 Astor Place (9th Floor), New York, NY 10003